The English have often been accused of being a solitary people, somewhat cut off from the continent. A good demonstration of this is with its footballers. As a number of nations released their provisional squads for Euro 2016, England emerged as the only team which hasn’t picked a single player from outside of its own domestic league.

The situation is similar if we look at the British Isles as a whole. The vast majority of players from Wales, Northern Ireland and the Republic of Ireland play their football within the UK. Real Madrid’s Gareth Bale stands out as the singular example of a British star thriving in Europe. Meanwhile, Northern Ireland’s and the Republic of Ireland’s foreign contingent are drawn from the A-League and MLS, hardly the highest standard of competition. 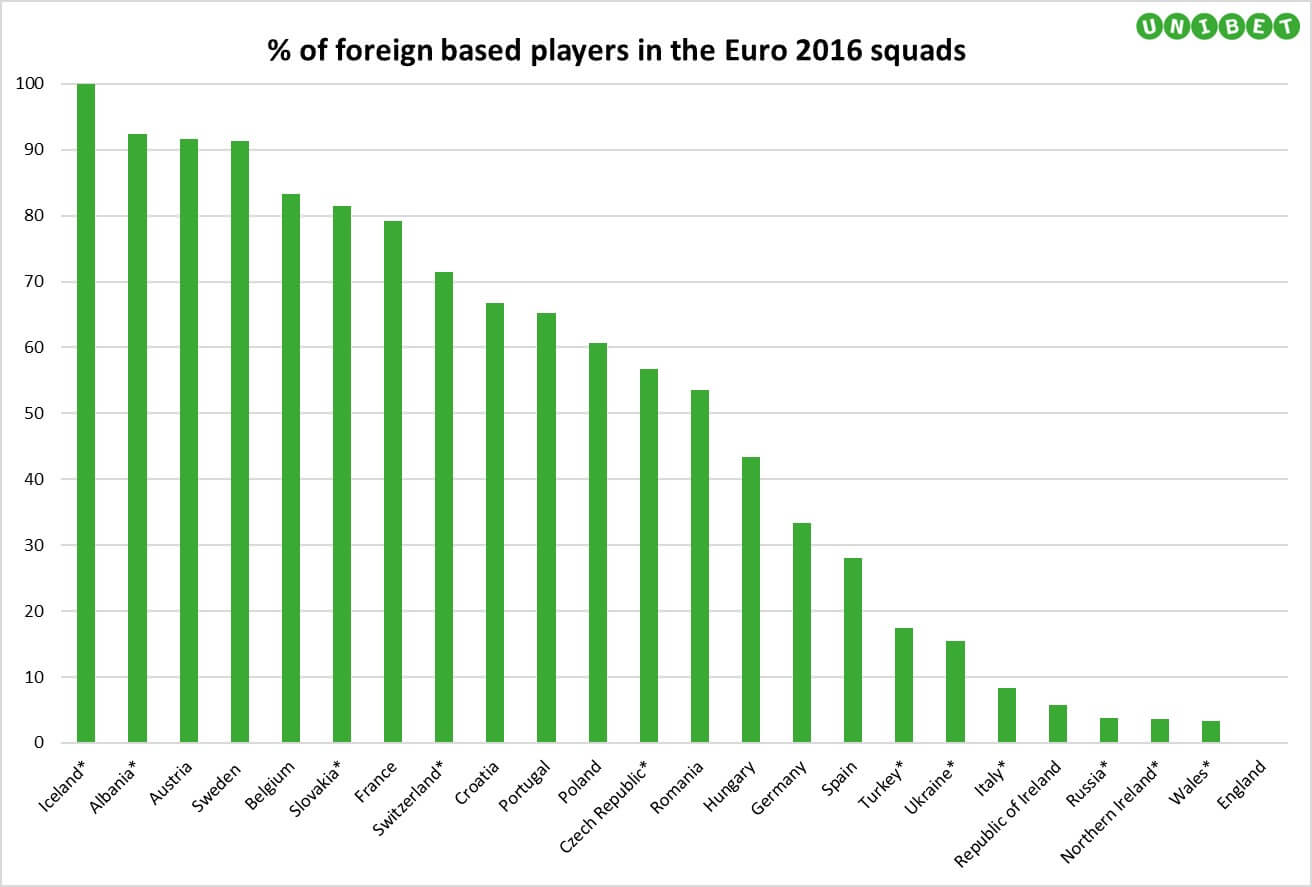 Why is this the case?

Historically, English players have been incredibly reluctant to move abroad. There are a few fairly recent exceptions: David Beckham spent successful spells at Real Madrid, AC Milan and PSG. Steve McManaman also became a mainstay of the Champions League winning Madrid side of the early-2000s.

However, today there is not even a single equivalent. Amongst the largest factors are culture and language. On the continent, learning a second language is fairly common. Therefore, Spanish, German, and French players find it easier to adapt to life outside of their home country.

In contrast, the British are notoriously bad at picking up other languages. Very few Premier League footballers would have even a basic knowledge of any of the continent’s languages. This makes the prospect of moving daunting.

Another factor is the predominance of the Premier League. It is considered as one of the three strongest leagues and attracts some of the best talents in the world. On top of this, English clubs, bolstered by the mammoth new TV broadcast deal, are able to pay a wage unrivalled by most. Money talks and there is an economic incentive to stay put.

What about the Bundesliga and La Liga?

It is understandable that most quality players from smaller nations migrate. In order to compete at the highest level, they must seek clubs in one of Europe’s major leagues.

However, an interesting comparison can be made with the other powerhouses: Spain and Germany. They are amongst the favourites to win Euro 2016, and La Liga and the Bundesliga are currently ranked first and second best leagues in Europe, above the English Premier League.

Unlike England, though, German and Spanish players are fairly well represented abroad. David de Gea, David Silva and Cesc Fabregas are amongst the Spanish expats plying their trade in England. German players are even more prolific abroad. Amongst the 33% of Germany’s foreign contingent are Arsenal star Mesut Ozil, Liverpool’s Emre Can, and Fiorentina’s Mario Gomes.

Despite having strong domestic leagues, Spain and Germany still manage to export successful players across Europe. This points back to the idea that their players are more culturally adventurous and adaptable. Another factor may be that they simply produce more quality players than England. With a surplus of talent, Germany’s and Spain’s finest find themselves spilling out of their own leagues and into some of the best clubs in Europe.

Why does it matter?

Foreign experience can be hugely beneficial for a player. Firstly, the very process of adapting to life in a new country can help them mature and keep grounded. This new perspective feeds into their performance on the pitch and overall mentality.

From a purely footballing perspective, playing in a foreign league is an opportunity to learn new playing styles and tactics. For example, the Spanish league is known to be less physical and much more technical than England’s. This is something Gareth Bale would have learned, and the process of acclimatising to this has made him a more rounded footballer.

Therefore, more players should consider leaving these shores and trying their luck abroad. Maybe it could give England the cutting edge they need to end decades of underperformance.

Quirks from around the continent

Elsewhere, the home nations find a partner in isolation in the form of Russia. Leonid Slutsky is yet to officially name his squad, but it is likely that the only serious foreign based contender is Aleksandr Kerzhakov, who plays on loan at Zurich. Whilst a wave of Russian players like Andrey Arshavin did move west after Euro 2008, few of today’s generation has done the same.

At the other end of the scale is tiny Iceland. The island nation only boasts a small semi-professional league (hardly a surprise considering its population of 300,000). As a result, every member of its 23-man squad plays abroad, including Swansea’s Gylfi Sigurdsson.