How to Play 3 Card Poker

Unfortunately, Unibet is currently not offering three card poker but we offer plenty of other table games in our Live Casino.

If you’re looking to play Live Casino poker but are uncertain over the intricacies of a game such as Texas Hold’Em, the 3 card version may just be the one for you. As the name suggests, this is a stripped down variant and, essentially, it’s poker in its simplest form.

3 Card Poker can be a perfect game for newbies but it’s an option that experienced players at Unibet also like to take. While there are fewer considerations in terms of winning hands, the skill and strategy levels required are higher than you might think so let’s now guide you through the game.

How do you play Live Three Card Poker?

Live Three Card Poker is played with a standard deck of 52 playing cards - jokers removed. There are just two opponents in this game - the player and the dealer - and before each round, the player is required to make two bets. The first of these is the ante which is placed in the centre of the table in an area which is clearly marked.

There is an optional secondary bet known as Pair Plus and this will pay an additional sum for winning poker hands of one pair or better. Place your bets and the dealing gets underway.

The player and the dealer now receive three cards, all of which will arrive face down. The player can check their cards but they won’t be able to see the dealer’s so it’s all about judging the strength of your hand against what the dealer might hold.

Now there are two possible courses of action - whether to play on or whether to fold. If the three card hand is a poor one - let’s say a 5 high with no matching pairs - the obvious ploy is to fold. In this case the opening hands are forfeited, the dealer’s hand is not declared, and the round of dealing will begin again.

The second option is to play on if you feel that your hand is strong enough to win the round. Remember that unlike other forms of poker, the three card version means that you will not receive any more cards so it’s the job of the initial three to take on the dealer. If you’re happy with the quality then you will literally need to ‘up the ante’. By this, we mean that you will need to double the ante bet that you made before the dealing took place so you place another chip in the ‘play’ section.

Cards are then declared to determine the winner. Note that if you continue to play and the dealer has a better hand, they must have a minimum of Queen High to actually take the pot. If they don’t reach this level, your play bet is returned.

At the end of every hand, you can decide to play on or you can walk away if you prefer. You are not locked in to a time frame or a set number of games so you are free to proceed or otherwise.

When it comes to forming a winning hand, It’s important to know the order of seniority. With a game such as Texas Hold’Em, hands are formed from five cards but the 3 Card alternative has less room to manoeuvre. 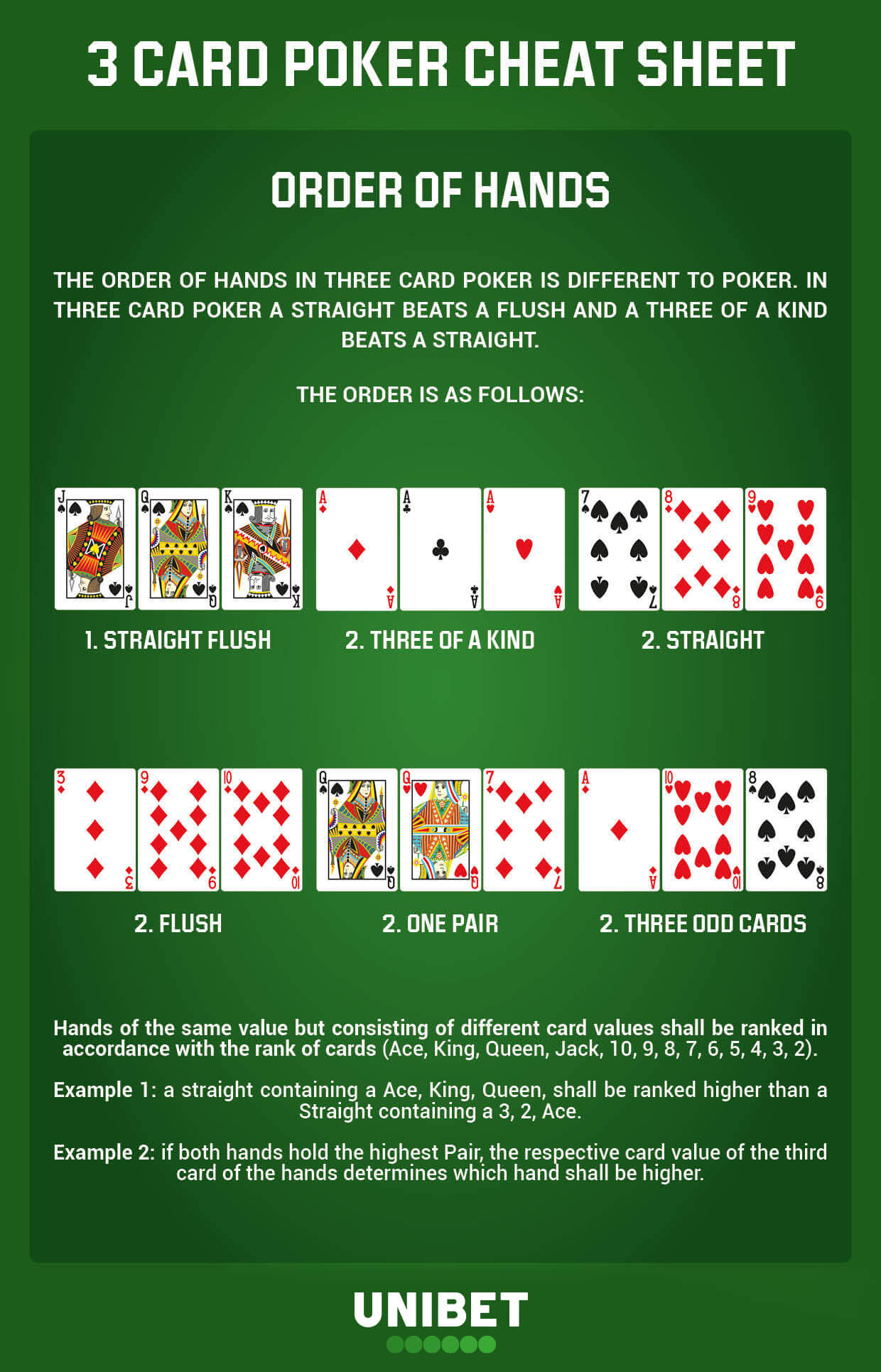 To keep things simple, we’ve created this ‘handy’ cheat sheet which details that order in full. At the top end of the scale, nothing beats a straight flush which is a run of cards that are all of the same suit. The Ace can be high or low so the best possible hand in 3 card poker is Q, K, A of a matching suit. If you draw this hand, probability suggests you will scoop the pot unless we have the unlikely situation where the dealer draws Q, K, A in a different suit.

From there, we move to 3 of a Kind which is self explanatory and then we have a straight. A straight is a run of three cards but the suits will not match in each case. A flush is a hand where a straight cannot be formed but all three cards are of the same suit. We then come onto a pair which, once again, is obvious, and finally it’s a high card.

A high card is the worst possible hand although if a player holds a Queen, a King or an Ace, they may just want to play through as opposed to folding. We’ll come on to the question of strategy in a moment.

For now, the first step on the road to becoming a Three Card Poker expert is to follow the cheat sheet until you are completely familiar with winning hands. They need to be committed to memory because you cannot slow down a game in the live casino while you check the value of your hand.

Complete those steps and you can now start to hone your playing skills.

Strategy for the main game against the dealer

As you become familiar with Three Card Poker, you will develop your own playing style and the question of whether to play on or fold will become second nature. When you’re just starting out on your journey, however, it pays to follow advice from senior and experienced poker players who have seen it all before.

At a very basic level, you will want to fold if you have a 5, 3 and 2 that are not of a matching suit. This is the worst possible hand that you can draw in three card poker and players should just cut their losses and wait for the next round of dealing.

Naturally, if you have one of the higher winning hands from a straight flush all the way down to a pair, you have an exceptionally strong chance of scooping the pot. That’s fairly standard advice but what should you do if your hand falls somewhere between the two ends of that scale?

Expert advice from seasoned players states to play on if your hand shows Q, 6, 4 or better. It’s not a stunning set of three cards but based on mathematical probability it means that you are still in with a good chance of scoring a winner.

In summary, the advice is to keep the following points in mind and always play on if you have:

Of course, by strictly applying that strategy you would have to fold any other hand that comes into play. This isn’t meant to turn you into a robot and you may feel that if the cards are in your favour that you might wish to play if you have a Jack High. In contrast, players have been known to fold when they have an Ace High and feel that it’s just not their day.

The decision is yours but these are strong guidelines that you should certainly look to take on board.

Strategy for Pair Plus

Remember the separate bet at the start of the round known as Pair Plus? This will pay if you have a pair or better, irrespective of whether you win or lose the hand.

It can therefore be a good consolation prize at the very least but remember that wins and losses can be more volatile than in the regular ante play.

It’s a good question: Why should you play Three Card Poker as opposed to Texas Hold’Em or Unibet’s Online Casino Hold’Em which is a big hit in our live rooms? Firstly, if you are relatively new to poker then this is easy to learn and it’s a good place to start. Three Card Poker does, however, rely on skill and strategy rather than just a chance hand.

It’s also fast paced and doesn’t involve the slow methodical play that a version such as Texas Hold’Em contains. Another advantage is the lack of additional opponents so the game comes down to you versus the dealer. This means that, while there are clearly no guarantees, the odds of winning are increased and that’s why experienced players also love Three Card Poker.

In short, it’s a game that can suit all poker players and now we just need you to get involved.

We’ve given you all the tools you need to start playing Three Card Poker and it’s now over to you to take up the baton. Another benefit with this game is the fact that you can start with low stakes until you become more confident with the gameplay.

Alternatively, there are demo versions of classic casino games available if you want to learn some skills before taking to the table. If you’re happy to jump straight in, there are many reasons why Three Card Poker is one of the most popular games at Unibet’s Live Casino and we’re sure you’re going to love it too.